The Desultory Theatre Club partners again with Cupcake Wars winner Hardcore Sweet Cupcakes  to bring you The Hardcore Halloweenie Burlesque & Variety Show at the Hardcore Sweet retail shop, bakery and performance venue at 20 Main St. in Oakville, Conn. The lights go down and temperatures rise when the show begins at 8 p.m. Tickets are $13 at the door. In true Halloween fashion, audience members are encouraged to come in costume for contests and prizes. 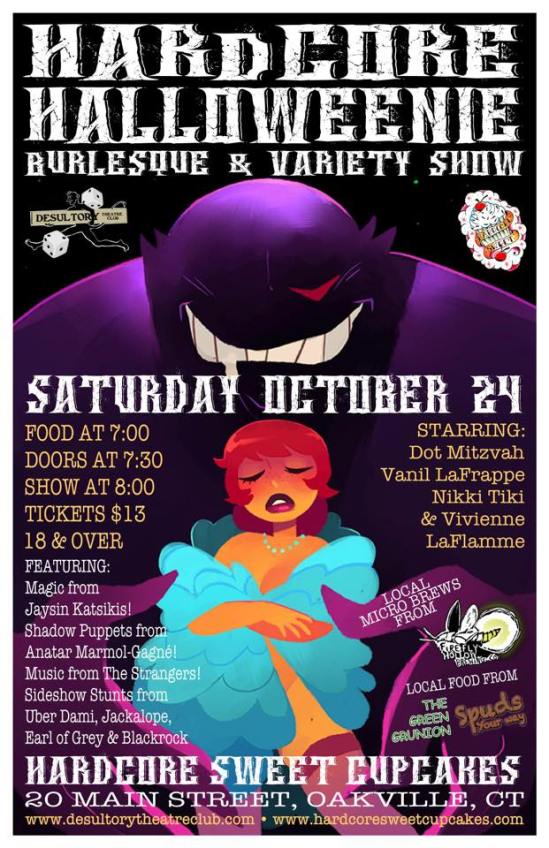 Some of the best in burlesque are prepared to bewitch: the award-winning Dot Mitzvah (Conn.) is the juiciest Jewess this side of the Wailing Wall; Vanil LaFrappe (Conn.) will shake and stir; Niki Tiki (N.J.) astounds as the Jessica Rabbit of burlesque; and Vivienne LaFlamme (Conn.) sets hearts on fire.

At 7 p.m., local food trucks Spuds Your Way and The Green Grunion will offer themselves for the ravenous hordes. The doors open at 7:30 p.m. to Hardcore Sweet’s retail shop and lounge, featuring cupcakes so award-winningly, terrifyingly good that Rob Zombie couldn’t resist. Firefly Hollow Brewing Co. of Bristol will offer samples of its craft beers that can quench any thirst at Hardcore Sweet’s responsibly BYOB establishment.

Local filmmakers Elmwood Productions, makers of the all-puppet slasher movie Head currently touring film festivals across the country, and Justin Talarski, an up-and-comer in the indie horror scene with the film Deimosimine (Legless Corpse Productions), also will be on hand to slay before the performers kill.

Are you ready for a scary good time? An offbeat Halloween trick AND treat? The Hardcore Halloweenie Burlesque & Variety Show will be your graveyard smash!

What happens when Circus Delecti, The Desultory Theatre Club and a bunch of Connecticut’s finest performers come together? 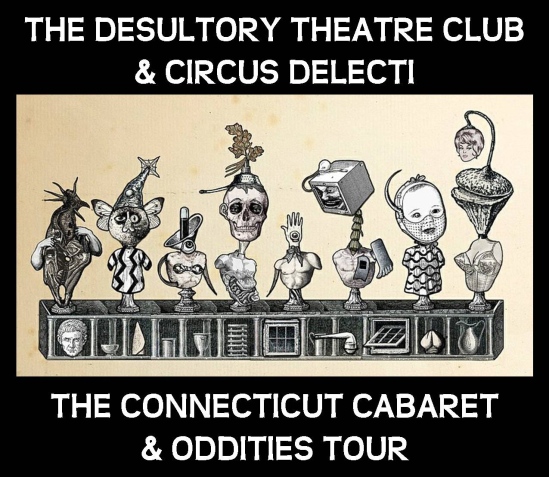 A mini tour of Connecticut that’s bound to blow your mind and senses!

Opening night of the tour is Thursday, April 2, 2015, at The Ballroom at The Outer Space!

With almost two hours of entertainment, including drag, sideshow, comedy, burlesque and more, this is a show you won’t want to miss!

$10 gets you in the door, with pre-sale tickets available online. Get there early–the doors open at 9PM; the show starts at 9:30PM! 21+ only at this venue.

More info can be found on the Facebook event page.

Can’t make it to the first night?

The second stop on the tour will be at Hardcore Sweet Cupcakes–winner of Cupcake Wars on the Food Network–in Oakville, Connecticut, on Saturday, April 18, 2015! 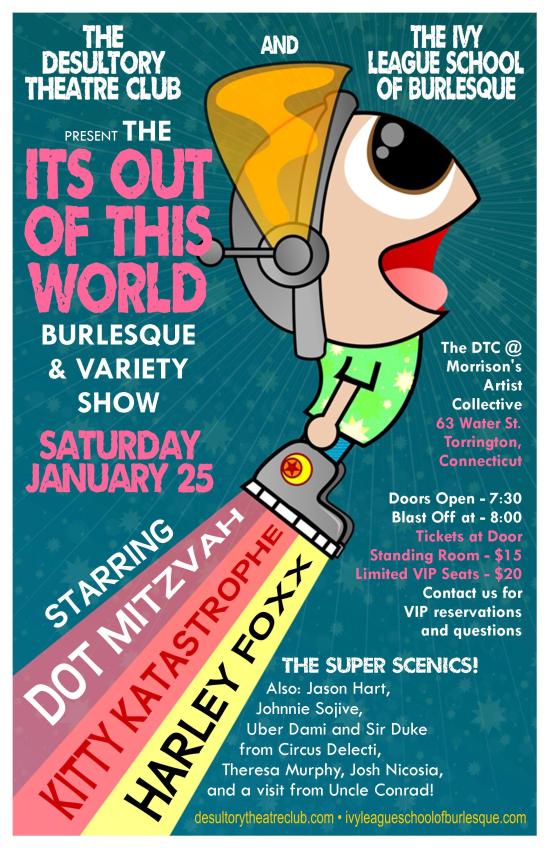 For the Desultory Theatre Club’s BIG 1 year Anniversary, We’re Bringing the Circus back to town!!  And adding 2 Punk Bands!! Teaming up with the great folks at Snapper Magee’s to bring you evening of entertainment….  A one of a kind evening of Circus Oddities and Rock n Roll!!

The Circus Delecti is a sideshow/stunt show which blends traditional sideshow acts and dances with modern day stunt spectaculars. Founded in 2002, their goal has always been to provide a wide variety of acts to crowds. Acts include classic favorites such as: the Human Blockhead, Bellydancing, Burlesque, Contortion and Comedy with new age stunt acts such as: Strongman Competitions, Ninja Demonstrations, Glass Eating, Glass Walking and Bed of Nails.

Damn Broads‘ CD RELEASE SHOW!!! The broads formed after meeting through an ad posted on Craigslist. Soon enough they were playing shows and by the end of a year they had released their first demo (The Damn Demo.) They are a punk band that happens to consist of all girls but don’t let their gender fool you – they are NOT a girl band. And don’t even think of asking if they’re a riot grrl band. Because they’re not.

The broads have a unique sound. They’re influenced by punk rock, street punk, ska, oi and alcohol lots of alcohol. They’ve been compared to The Pist and the Vomit Punx. They thought that was pretty cool. They were telling peple for weeks… not like people cared, but they told ’em.

The Theatre Zombies is a horror rock trio from Noroton Heights, Connecticut pride themselves on writing fast and fun songs that stretch past the niche and speak to a wide audience of people! They consist of singer/songwriter/guitarist Rob Harms, bassist/songwriter/backup singer Mike Harms, and drummer Tommy Tran.

Like Loading...
Hey there Boys and Girls!
Thinking about coming to the Circus? Here’s a helpful reminder of the schedule and how much fun you could have!
7:00pm – The Rocket Lands! Come down early and enjoy some great food from the gastronauts at Rocket Fine Street Foods! As you’re enjoying your goodies check out the exciting new changes happening around you in the downtown area!
7:40pm – Doors open to the Event! Come on in early to grab a good seat! For those 21 and over BYOB! Stop in and check out Artwell‘s 15th Annual Juried Art Exhibit!
8:00pm-ish – The Show Begins with a Mystery Puppet Show called “Balls of Moss”! What’s it about? I really have no idea, So let’s find out together!!!
8:15pm-ish – It’s a sideshow! It’s a variety show! It’s a stunt show! It’s a freak show! It’s the Circus Delecti! Laugh and Marvel at the Amazing tricks and stunts that will unfold before your very eyes! A Human Blockhead! A Contortionist! A Belly Dancer! And a Ninja vs Pirate Strongman Competition!! And much more!!!

All this Amazing entertainment for such a low price?!? It’s a great night to experience one of the many new events that The Desultory Theatre Club and Torrington has to offer!

There will also be a limited number of $8 Standing Room Only Tickets! 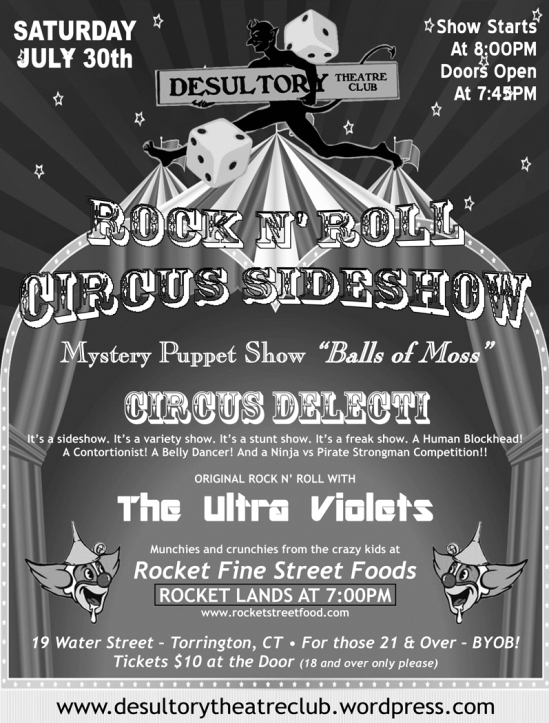 Ladies and Gentleman! Children of all ages! (18 & Over)

It’s a sideshow. It’s a variety show. It’s a stunt show. It’s a freak show. A Human Blockhead! A Contortionist! A Belly Dancer! And a Ninja vs Pirate Strongman Competition!!

DON’T MISS OUT ON THIS ONE-OF-A-KIND SHOW, FOLKS!!!

WHAT OTHER SURPRISES DO WE HAVE IN STORE FOR YOU???

*UPDATE* – 6/20 – Did somebody say Puppets?  Just added to the bill… “Balls of Moss” featuring Anthony Barone and Benvolio Tomaiuolo!

“We are limited only by the ability and imagination of those who call us friends and fellow artists.”